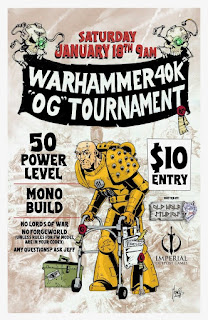 Saturday was our 5th 40K OG at Imperial Outpost Games.  This is a fun event and we had 30 players show up to play.  We actually had to turn people away because we didn't have enough table space.  I took my Adeptus Custodes and they did okay.  My first game was a lose against Tau and I was tabled by the end of turn 4.  I don't play enough and really didn't know what to expect from Tau and now I do.  I should have taken advantage of deep striking and got into close combat with this army.  My second game was against Adeptus Custodes and it was a fun game.  We both had different army configurations so it was a fun game.  I ended up winning the game objective however he won with more tournament points.  My last game was against IG and my dice went stupid on me.  I lost my two hard hitting units because I failed all my save rolls.  This caused me to loose the game but I still had fun playing the game.

The event organizer had challenge coins made for the event and they look cool. 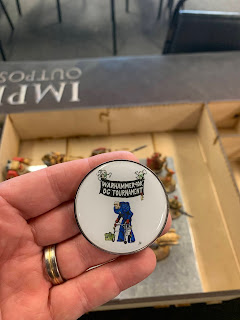 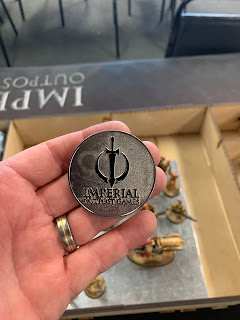 Another cool featured added to the event were the table numbers.  A local company, Mechanical Warhorse, made these table numbers and we were the test subjects to see how they work.  They were real helpful and make the tables look better so players could find their tables. 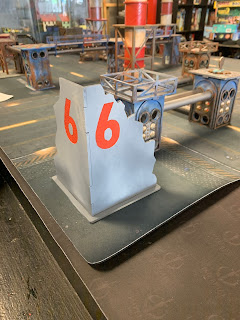 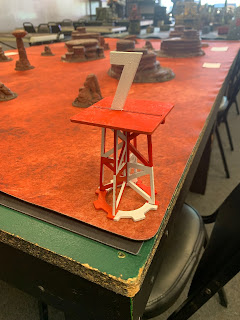 I know of only one negative event that took place during the event because it happened right behind me.  One player was set up behind a building during the shooting phase.  The other player could see part of one weapon and shot at them.  The shooting unit had only one model that could see the part of the weapon and the unit was shooting out of terrain through two windows and he got to take all his shots.  This caused a disagreement and the judge was called over.  It was ruled this is how the rules are written and he can shot at the unit.  The one player ended up conceding the game because he did not like the rule.

This is one of those rules I don't like with the current rules and I would have never taken that shot.  This is just one of the few examples of how the rules have changed the game to a shooting game and is focused on tournament players.  This LOS rule is just as silly as how tanks can shot all it weapons regardless of the facing of the weapon.  Take these rules with all the crazy special rules that allow units to hit on 1's but because all ones fail the player gets to reroll ones, that was my game against Tau.  This is why I really don't play 40K anymore at the shop because there are all these crazy rules for shooting and it just is not fun to play.  I  will continue to support the 40K OG in the future but I can't take it seriously as a game.

Yeah I have moved on from 40K. I was really excited when 8th edition was released but that faded fast. I should have stuck with reviving 5th edition as that was a way better game. In the end Kill Team lets me use my toys and does not suck.

I was also excited when it came out and I was hopeful they would add more to the rules as it moved forward. Seems they are only updating rules that cause problems in tournaments and not improving game play.

8th edition was pretty good when it came out as it was simple and streamlined. Over the past year the game has become full of bloat, complications, and special rules. Supposedly a new edition is coming out this year and I just have zero interest. I agree with Rob that Kill Team is a fun game to get your 40k fix.

Unfortunately, your write up regarding the table behind you is exactly why I don’t play in tournaments and only play with friends.